Does CBD Help with Fibromyalgia?

CBD oil is a subject of widespread attention as a potential treatment for fibromyalgia. For now, there isn't much concrete research about it, but we have collated some which is promising.

Still, many people do not fully understand what CBD oil is or how it works, which sparks controversial conversations about marijuana for medical purposes. The vague regulations in medical cannabis make people reluctant to explore it as a potential solution for their symptoms, even with science to back up its benefits.

In this article, we explore what fibromyalgia is and why CBD may be able to relieve the pain associated with fibromyalgia, so please keep reading on!

A 2013 review shows that cannabidiol (CBD) can help alleviate pain caused by fibromyalgia and other conditions, including rheumatoid arthritis and multiple sclerosis (MS).

The US Food and Drug Administration (FDA) has not approved the use of CBD for medical purposes. However, the FDA has approved CBD as a treatment for two types of epilepsy in June 2018.

The investigation is in progress and its legal status, as well as the state of other cannabinoids, varies. A person must check their local laws before trying to get CBD.

The 2015 review analyzed the research of cannabinoid use to relieve chronic pain, although it is not explicitly related to fibromyalgia. Seven out of eleven studies included in the analysis showed that CBD relieves pain.

The second study in 2015 examined the results of 28 randomized controlled clinical trials of marijuana for medical purposes as a pain treatment. Many studies focused on MS pain. The review has shown that high-quality data supports cannabis use for medicinal purposes and specifically to treat chronic pain.

A 2017 study concluded that CBD might suppress the hypersensitivity of cells that surround the nerves in people with chronic pain, including those with fibromyalgia. However, this also highlights the need for further research.

Symptoms sometimes occur after a physical trauma, surgery, infection, or significant psychological stress. In other cases, the symptoms accumulate over time without any event.

Doctors do not know what causes fibromyalgia, but it probably includes several factors working together. These may include:

Genetics: As fibromyalgia manifests in families, some genetic mutations can cause a higher probability of disease development.

Infections: It seems that some diseases cause or exacerbate fibromyalgia.

Physical or emotional trauma: Fibromyalgia may result from severe bodily injuries, such as a car accident. Psychological stress can also stimulate disease.

Generally, fibromyalgia treatments include medication and other treatment options, including CBD. The focus is on reducing the symptoms and improving overall health. There is no therapy for all symptoms.

Be sure to consult your physician to find out which one of them should be selected.

Antidepressants: Duloxetine (Cymbalta) and Milnacipran (Savella) can help reduce the pain and fatigue associated with fibromyalgia. Your doctor may prescribe Amitriptyline or Myorelaxant Cyclobenzaprine to help you sleep.

Anti-seizure drugs: used to treat epilepsy often help to reduce some types of pain. Gabapentin (Neurontin) sometimes helps to reduce the symptoms of fibromyalgia, while pregabalin (Lyrica) was the first medicine approved by the Food and Drug Administration for the treatment of fibromyalgia.

Complementary and alternative therapies for treating pain and stress are not new. Some, like meditation and yoga, is practiced for thousands of years. But its use has become more prevalent in recent years, especially in people with chronic illnesses such as fibromyalgia.

Many of these treatments seem to relieve stress and reduce pain, and some are increasingly accepting conventional medicine. But many practices remain unchecked because they re

Acupuncture: Acupuncture is a Chinese medical system b on restoring life force by inserting very fine needles through the skin at different depths. According to Western theories of acupuncture, needles cause changes in blood flow and neurotransmitter levels in the brain and spinal cord. Some studies show that acupuncture helps alleviate the symptoms of fibromyalgia, while others show no benefit.

Massotherapy: This is one of the oldest methods of treatment that is still in place. Massotherapy includes the use of various manipulative techniques to move the muscles and soft tissues of your body. Massage can reduce heart rate, relieve muscles, improve the range of joints, and increase the production of natural pain medications in your body. It often helps in alleviating stress and anxiety.

Yoga and Tai Chi: These practices combine meditation, slow motion, deep breathing, and relaxation. Both are useful in controlling the symptoms of fibromyalgia.

Cannabidiol products are used for therapeutic purposes without psychoactive symptoms of marijuana for medical purposes. However, it is sometimes difficult to find a product containing only CBD that does not contain THC. In this case, products containing CBD and THC can still effectively treat pain.

CBD can be used in several ways, including:

Smoking or Vaping: If you want to relieve pain immediately, vaping CBD-rich cannabis is the fastest way to reduce your symptoms. Effects can take up to three hours. Smoking allows you to inhale CBD directly from the cannabis plant, absorbing the chemicals in the blood and lungs.

Edibles: Edibles are foods made from cannabis oil. It will take more time for the symptoms to disappear, but the effects of edibles may take up to six hours.

Topical: In cannabis, CBD oils can be injected into creams and bales to apply to the skin directly. These CBD products can be an effective option to reduce inflammation and help relieve external pain.

Oil extracts: The ointments can be administered topically, taken orally or dissolved under the tongue and absorbed into the mouth tissue.

How CBD Can Treat Fibromyalgia Symptoms

Symptoms of fibromyalgia include:
Widespread pain: Pain associated with fibromyalgia is often described as a permanent pain that lasts for at least three months. To be considered widespread, pain must occur on both sides of the body above and below the waist.

Fatigue: People with fibromyalgia often get tired, even though they report that they are sleeping long. The associated pain usually affects sleep, and many fibromyalgia patients have other sleep disorders, such as restless legs syndrome and sleep apnea.

Only a few studies have analyzed the efficacy of CBD in the treatment of fibromyalgia.

Researchers cannot decisively explain why the compound seems to reduce some of the fibromyalgia symptoms, but they are testing some robust theories in their studies.

The effects of CBD's pain-relieving effects are due to how the substance reacts with the brain. CBD disrupts the nervous paths that send signals of pain between the brain and the body.

There are also anti-inflammatory properties to CBD that reduce heat and swelling around an injury, also reducing pain.

It is also questionable whether CBD is more effective when used alone or as marijuana for medical purposes. The combination of other chemicals in the plant can improve the CBD's positive effects and provide additional benefits. A 2006 study has shown how CBD works better in co-operation with THC, but further research is needed.

A 2016 study suggests how the lack of endocannabinoids (cannabinoid receptor binding neurotransmitters) could cause chronic pain syndrome, including migraines and fibromyalgia. Using CBD may alleviate chronic pain.

More research is needed to understand this process better.

Some brands like Mana Artisan Botanics™ also offer therapeutic creams and oils that can be applied directly to your skin.

That's why we are proud to endorse a product designed specifically with pain related to fibromyalgia.

It feels good and smells great! 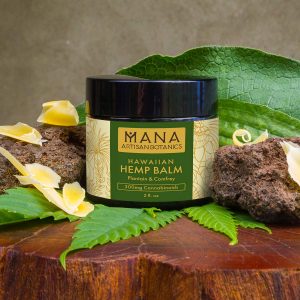 What's the CBD Dosage for Fibromyalgia?

Scientists are still testing the effectiveness of CBD as a treatment for chronic pain disorders, and more research is needed. Even with the many success stories for how CBD has helped people living with fibromyalgia, the FDA has not endorsed CBD as a staple treatment for this condition. We hope with further research and time; we will see how CBD affects the body long-term.

Barnes, M. (2006). Sativex®: clinical efficacy and tolerability in the treatment of symptoms of multiple sclerosis and neuropathic pain. Expert Opinion on Pharmacotherapy, 7(5), pp.607-615.

Podda, G. and Constantinescu, C. (2012). Nabiximols in the treatment of spasticity, pain and urinary symptoms due to multiple sclerosis. Expert Opinion on Biological Therapy, 12(11), pp.1517-1531.

Previous Post Does CBD oil help with Neuropathic (Nerve) Pain? Next Post How Does CBD Help with PTSD?