Is CBD a Recommended Treatment for Sleep Apnea?

You know one of those odd things/incidents you might not pay attention to initially, but later develop into something noteworthy? Like an annoying lump or a slight headache that then becomes a thunderstorm?

These incidents may seem inconsequential at the time that you wouldn't overthink them.

But what if the incident occurs frequently enough to catch your attention? At that point, it has probably become more than a little inconvenient for you.

In this article, we'll cover everything you need to know regarding CBD's effect on sleep apnea causes and symptoms, so please keep reading to learn more...

Sleep apnea is precisely like that, you don't notice the symptoms until it has you tight in its grip. Every sign and symptom matters, especially if they keep recurring. In this post, we'll be discussing the concept of sleep apnea and how CBD could help to treat it.

What is Sleep Apnea?

Sleep apnea is a sleeping disorder identified by an involuntary stop in breathing during sleep. Stops or pauses may occur sparingly or frequently, depending on the type and intensity.

Sleep apnea can affect anyone and does not discriminate based on age, sex, or even race. Some common risk factors ​are obesity, large neck size, problems with the sinus, etc.

Obstructive sleep apnea (OSA): This is the most common form of sleep apnea, 84% of people who suffer from sleep apnea have the OSA type. OSA occurs when a person's airway is blocked during sleep due to the collapse of the soft tissue at the back of the throat.

Central sleep apnea: This is more dysfunction of the brain than any real business with the nasal organ. The brain refuses to give the signal to inhale during sleep, causing a pause or a stop in breathing.

Mixed apnea: This is the third category of sleep apnea and the least most occurring of the three, it affects about 18% of people. From its name, mixed apnea is the combination of the first two categories of sleep apnea, Obstructive sleep apnea, and Central sleep apnea.

Some have stated that this category does not mainly refer to a pause or stop in breathing, but a fragmented form of sleep which is caused by the occasional response of the body to rouse the sleeper every time he/she stops breathing from the effects of any of the first two categories.

The brain sort of kick starts the breathing cycle after each pause.

Signs and Symptoms of Sleep Apnea

Unlike some other sleep disorders where symptoms vary from person to person, sleep apnea's symptoms are quite constant. Below are some significant signs of sleep apnea:

Loud and continuous snoring: Snoring is a pretty common occurrence for a lot of people, but snoring consistently and emphatically may indicate a presence of sleep apnea.

Before knowing for sure if you need to treat sleep apnea, it is important to speak with your doctor and undergo a sleep study using polysomnography which can help your doctor determine if you have sleep apnea by reading machines connected to your body while you sleep.

Sleep apnea is more common among people than many realize, for this reason, it is vital always to be self-aware and health conscious. Treating sleep apnea varies from person to person.

The most common treatments for sleep apnea includes:

Before attempting any treatment for any health-related concerns you may have, please consult with your physician. Your health is not something to take lightly.

According to the American Academy of Sleep Medicine, positive airway pressure (PAP) therapy is the most effective treatment option for OSA.

These devices help you to breath better by splinting the airways open while sleeping. This treatment is particularly useful for treating Obstructive Sleep Apnea.

The mechanics behind using the CPAP OR APAP for treating obstructive sleep apnea are quite simple and straightforward, but you may ask,

What is the treatment for central sleep apnea since the causes are clearly different?

For central sleep apnea, using supplemental oxygen during sleep may help to treat it. Also, there are medications such as acetazolamide or theophylline, which are used to stimulate breathing.

The more dramatic methods of treating sleep apnea may seem too much for you, or your current medication isn't giving you the desired effect, maybe you want a more comfortable option for your sleep apnea treatment.

Below are some alternatives to CPAP treatment for sleep apnea:

Due to the potential severity of sleep disorders, sleep apnea treatment options are growing steadily, one such treatment is a Cannabinoid drug, aka dronabinol, a synthetic THC drug that is showing promise in clinical trials.

CBD helps to balance your endocannabinoid system (ECS), which regulates various psychological and physiological processes, including sleep and many other cognitive functions.

The interaction between CBD and the ECS keeps your body in homeostasis.

When it comes to sleep, their
Passionflower Lehua CBD Sleep Tincture​ ​​​hits the spot!

It has a bright, floral, semi-sweet flavor which mixes well with tea and tastes great alone.

Plus you'll get 10% off your first order! Be sure to check them out. 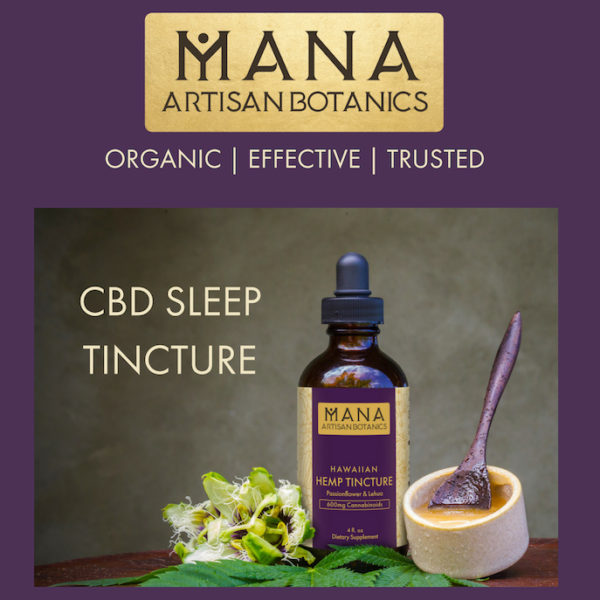 CBD helps your body recover faster from stress by speeding up the rejuvenation process that occurs during sleep, but it may also have therapeutic potential treating insomnia.

According to a clinical trial involving 72 patients sleep scores improved within the first month for 48 participants.

Further trials with CBD and other cannabinoids need to take place before CBD can be labeled definitively as a sleep apnea treatment, but early synthetic CBD/THC drugs showed promise.

Though scientists could not pinpoint exactly why CBD was helpful, it is believed that CBD helps to increase the upper airway muscle tone, leading to a firmer glottal region, which lessens the effects of certain forms of sleep apnea.

CBD blocks the serotonin-mediated pathway, which is responsible for the loss of muscle tone and subsequent collapse of the esophageal tissue.

The clear pathway allows free flow of air, effectively eliminating the nasal struggle your nose goes through when you begin to snore.

Snoring: Snoring is one of the most telling and inconvenient sleep apnea symptoms, and it can quickly become a bother if not checked. CBD may be a possible solution for your snoring problems.

Depression: CBD is an excellent treatment for depression, but did you know that depression can be a major symptom of sleep apnea?

While CBD doesn't cure depression, it helps mitigate symptoms by activating the release of serotonin, which is responsible for reducing stress levels and improving your mood.

Sleep apnea is a potentially dangerous sleep disorder that many have no idea they suffer from, its signs and symptoms vary from chronic snoring to depression, blurry vision, etc.

Treatment of sleep apnea may be as simple as using CBD/PAP devices, losing weight, or just changing your lifestyle. It is important to note that a constant check and self-awareness will also go a long way in helping to improve your health.

Many of these disorders may not manifest in distinct ways, but checkups and a healthy lifestyle are sure to keep you on the right path.