Everything you need to know about your Endocannabinoid System

What is the Endocannabinoid System?

Simply put, cannabinoids provide a service to your body, ensuring that your body's internal functions run smoothly. Your body's endocannabinoid system (ECS) regulates signals to and from the brain that trigger the production and release of essential chemicals your body needs as it needs them.

Researchers tout the endocannabinoid system will provide even more insights for the future development of therapeutic drugs.

When Was the Endocannabinoid System Discovered? - A Brief History

Raphael Mechoulam, a scientist from Israel studying the Cannabis Sativa plant and trying to identify the active components inside it identified and isolated the very first cannabinoid in 1964.

Soon after, scientists found the brain's opiate receptor, but a government-funded research study at the St. Louis University School of Medicine was the birthplace of the endocannabinoid system as we understand it today. In 1988, Allyn Howlett and William Devane discovered the endocannabinoid system by linking cannabinoid reactions to the most abundant neurotransmitter receptors in the brain. It turns out these receptor sites respond to cannabinoids found both in cannabis and those produced within the body.

By tracing the THC’s metabolic pathways, scientists honed in on this unique and unknown molecular signaling system that is involved in regulating a broad spectrum of biological functions, and it has been referred to since as "the endocannabinoid system" (shortened from Endogenous Cannabinoid System) after the plant that helped them discover it in the early 1990's.

The name suggests that the plant came first, but in fact, this ancient internal system has been evolving for over 600 million years (long before cannabis appeared) when the most complex life forms were sponges.

How does CBD Interact with the Endocannabinoid System?

To better understand the ECS, it helps to discuss homeostasis. Homeostasis simply means your body's ability to maintain a chemical balance. Your body is constantly receiving external stimuli, and the endocannabinoid system is your body's the reactor. In order for it to run optimally, your ECS reacts to all the stimulus it receives from the environment and triggers the release of chemicals to keep your body in balance.

Your ECS consists of three parts: 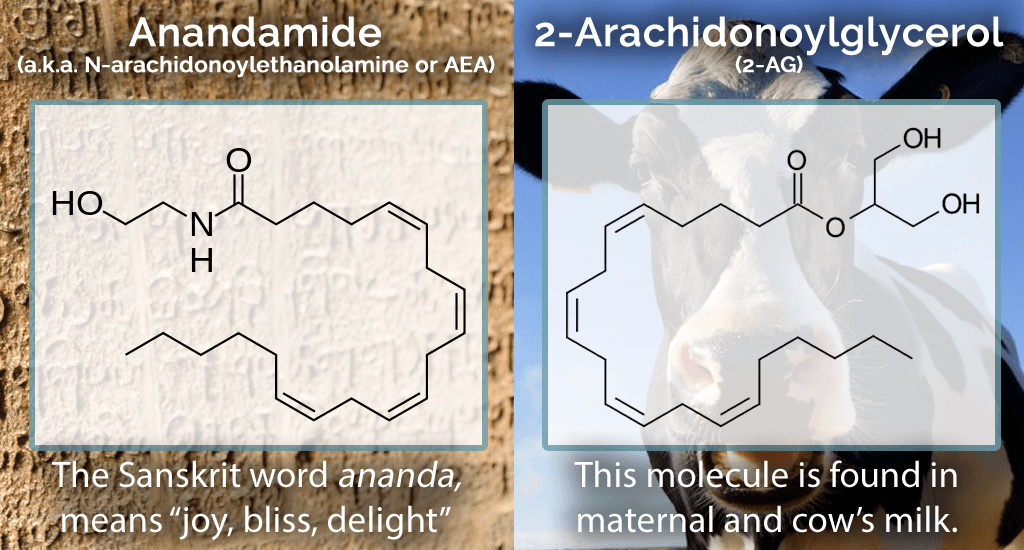 Anandamide (AEA): This endocannabinoid is responsible for keeping you feeling calm. Anandamide plays a role in regulating appetite, motivation and pleasure. When directly injected into mice, it enhances the pleasure responses to sugars, and is considered responsible for "runner's high." It is often equated to THC, which appears to mimic its affects.

2-arachidonoylglyerol (2-AG): This largely ignored molecule is found in maternal mother's milk and has been linked to feelings associated with orgasm. In fact, when studied, participants experiencing orgasm showed a spike of 2-AG while anandamide levels remained constant. It is often equated to CBD, however CBD is not linked to any specific changes in sexual response, so it is hard to connect them directly in this way.

When the body is not producing endocannabinoids and releasing them when they are needed, this is considered an endocannabinoid deficiency. Sometimes the brain will attempt to send chemicals through the body when it doesn't need to, while other times your body may not respond to stimuli in the correct way. Either of these conditions can result in a host of problems for you.

People with endocannabinoid deficiencies may experience symptoms of many common and chronic health problems. The most common deficiencies may result in anxiety, chronic pain and fatigue, depression, inflammation mood disorders, even autoimmune disorders.

How does the Endocannabinoid System Work?

The Endocannabinoid System (ECS) works by regulating neurotransmitter signals to and from the brain, triggering specific chemicals, hormones and enzymes to be produced and delivered when and wherever they are needed as a response.

If you have ever been sick, you may run a fever. This is because your ECS has triggered the production and release of antibodies and white blood cells to attack the foreign invader that is making you sick.

Likewise, if you are too hot, your ECS will open your skin's pores allowing you to perspire. This sweat cools your body when exposed to the air. Once your body is no longer hot, your ECS closes your pores and you stop sweating.

The ECS is your body's reactor. It is constantly regulating body processes to keep your systems balanced and working optimally. 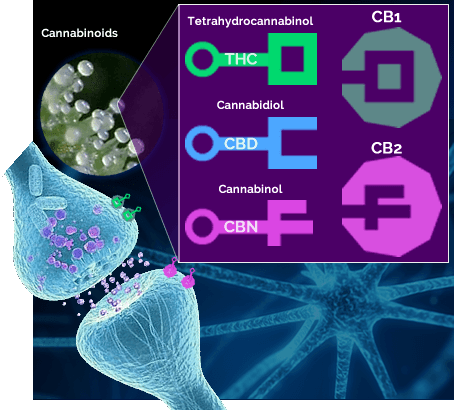 CBD and other phytocannabinoids are capable of interacting with the body and the brain through the endocannabinoid system (ECS), a network of receptors which trigger chemical responses in the body.

The human body has two receptors for cannabinoids, referred to as CB1 and CB2 receptors. CBD attaches to some of those receptors, causing the ECS to trigger various physiological responses.

While research is still ongoing, we know of at least two types of cannabinoids found within the human body. Let’s break these down!

CB1 receptors are present throughout the body, but many are in the brain. CB1 receptors in the brain deal with coordination and movement, pain, emotions, and mood, thinking, appetite, memories, and other functions. THC has been shown to act on and stimulate serotonin pathways in the brain which can help provide relief for anxiety, depression, and migraine symptoms.

CB2 receptors are more predominantly contained within your peripheral nervous system (extremities), your digestive system, and immune system. They regulate inflammation and pain response. CBD works with the ECS to help stimulate CB2 receptors which can significantly reduce pain related to inflammation and assist in healing inflamed areas.

These 2 receptors in your ECS help to regulate many crucial functions like:

Research has shown that the plethora of varieties of cannabis being cultivated and manufactured in the medicinal and recreational market have different effects.

The plant's phytocannabinoids all interact and bind together with the terpenes and flavonoids to produce an intricate interplay within the plant's system.

The Benefits of CBD with Endocannabinoid System Receptors

There are many benefits of cannabidiol. It is used to relieve pain, inflammation and a bunch of other effects.

NOTE: A combination of THC and CBD can even be used to treat symptoms related to multiple sclerosis!

CBD oil has also been found as a treatment for both depression and anxiety, leading many who live with these disorders to become interested in this natural approach.

CBD may have beneficial effects on acne due to its anti-inflammatory qualities and its ability to control the overproduction of sebum from the sebaceous glands.

Researchers have also shown that CBD can be used to treat IBS, Irritable bowel syndrome is a more common disorder that affects the large intestine, it is a chronic condition that you'll need to manage long term. Can CBD oil help with IBS? The answer is Yes!

A common question people ask is "how much CBD oil should I take for IBS"? It is essential to recognize that everyone responds a little differently to CBD, so there is no set dose to take of CBD oil for IBS.

Other benefits of CBD include:

The endocannabinoid system plays a critical role in keeping our bodies healthy. While research into the specifics of how this system functions is fairly new, the recent legalization passed through the 2018 Farm Bill has ensured more scientists will be able to conduct properly funded research on it.

If you found any of the information within this article helpful, please share it with anyone who needs to know how important cannabinoid research is to soceity.